Rotary Club Bali Ubud Sunset
District 3400/No.79571
Meeting every Monday at 5:30 pm Maya Resort, Ubud
“Everyone has his day and some days last longer than others”    Winston Churchill

Pres LLoyd extended a warm welcome to Fred and Mandy Brauer who have returned from their world wide wandering between Bali, San Diego, USA and Cairo, Egypt. Mandy brought copies of her recently published children’s books and the stories and poetry were delightful, the illustrations colorful and charming.  The next stop for these books will be the Pondok Pekok Children’s library where they will certainly be very much enjoyed.  And remember YOU are always welcome to drop by and read a story to the young people at the children’s library.

VP Rucina is building a formidable line-up of guest speakers, including those who can knowledgeably address  the complex culture we all so much enjoy in Bali.  The plan is to have one meeting a month with a speaker who will focus on a particular aspect of the island’s culture.  Needless to say, we’ll never learn it all 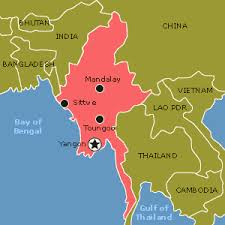 Burma is surrounded by Bangledesh, India, China, Laos and Thailand

Pauline Rosenblum once again spoke with us during her annual visit to Bali as she returns from her native Australia to Yangon, Myanmar where she is Head of an international Primary School.  Pauline shared some of the history of the Myanmar as well as some beautiful textiles woven by the indigenous tribes of Myanmar.   When Burma was renamed Myanmar some years back there was much fuss over the change in name…but no fuss in Myanmar.  As it turns out the country’s name has gone through several levels of spoken change but in reality, the name has never changed…it just sounds different. The name of the country was originally based on the name of high caste Indians, the Brahman caste.  It gradually became to be pronounced Burma and most recently called Myanmar (you have to hear it said with the correct accent to realize that the three names do sound very much alike).  Pauline brought three samples of different hand woven textile designs representing three of the four major tribes in Myanmar.  Pauline’s descriptions of the beautiful countryside and simple way of life and friendly people, has many of us thinking abpout making a visit.  WARNING…..IT’S HOT!

Below is final report by Rtn Cat describing a recently completed and very successful farming project.  The results exceeded expectations!

In 2007, the Funding Network provided a grant of Rp 131,870,000 (GBP 7,438) to train trainers in the System of Rice Intensification (SRI), a cultivation system that produces more rice using less seed, less water and no chemical inputs. The first trainings took place in November 2007.  Three and a half years have passed since the project began, allowing for multiple harvests and a fair trial of the technique and training trends.

After the initial 32 subak (cultivation areas of many farmers using a single irrigation source) leaders were trained in late 2007, Project Trainer Chakra Widia went on to train another 250 farmers all over Bali in the SRI.  In June 2011, the original 32 subak leaders were contacted and asked to fill in a questionnaire that gave the details of their experience and harvests.

All but two of the original subak leaders are still using the SRI technique because it produces more rice than conventional rice farming methods.  The two that have abandoned the practice did so because there was insufficient water in their areas to continue cultivating rice.

All but these two subak leaders/trainers have gone on to train the farmers in their own subaks and many went on to train other subaks, for a total of 1181 farmers trained on a total of about 345 hectares of rice field in seven of Bali’s regencies  by these original  trainers.  This is an average of 39 farmers trained by each SRI trainer.   Chakra feels that a similar ripple effect is taking place around the island with the hundreds of other farmers he has trained.

The System of Rice Intensification (SRI)

The conventional cultivation method of growing hybrid rice in Bali is to plant about 10 rice seedlings in a bunch about 20 cm apart, flood the field and treat it with chemical fertilizers, pesticides and herbicides.

The SRI saves farmers money and increases yield dramatically in several ways. Seeds are first tested for viability.  Planting just one seedling 30 cm apart instead of a bunch together allows the plant to grow more strongly. Ten day old seedlings are set out in late afternoon, so the plantlets aren’t stressed by the sun, and planted at an angle so as not to damage the root.

The fields are flooded only two days out of seven when the plants are young, encouraging deep, strong roots and saving 80% of the water used in conventional rice cultivation (a serious issue in times of dwindling water access). When grown without chemical inputs, the farmer saves the cost of these. Manual weeding ensures a better crop. If ducks are released into the flooded fields when the plants are two months old, and they take over the weeding, pest control and fertilizing until harvest. Returning to the traditional cycles, the field is then rested and sown in peanuts or other legumes. This cash crop enriches the soil before it’s planted in rice again, and additional income can be earned from the ducks and eggs.

This method saves 90% of the cost of seed. Because it doesn’t have to compete for nutrition and sunlight, a single SRI rice plant can set over 60 (some reports claim 100) grain-bearing shoots (tillers). When correctly practiced, SRI yields at least 100% more rice than conventional rice cultivation, while rehabilitating the soil. Individual rice grains are also heavier. The Indonesian government now endorses the SRI and encourages rice farmers around the country to adopt it.

Recognizing the damage done to the soil over the past decades by overuse of chemical inputs, the Indonesia Government through the Department of Agriculture in 2005 released an edict announcing that all agriculture in Indonesia should be chemical-free by 2010. Although the Department of Agriculture does not yet have the capacity to deliver widespread training, it is interesting to see this change in direction.

Training of Rice Farmers in the SRI

With funds from The Funding Network in England, an SRI training program began in November 2007, executed through Rotary Club Bali Ubud Sunset and a Balinese permaculture trainer.

Thirty two farmers from 10 different subaks were trained in the SRI and composting techniques, then monitored through seed selection and germination, planting, weeding, pest control and other issues through to harvest.  As of 20 June 2008, all of the project’s rice from the first phase of training 32 farmers had been harvested.

The conventional white rice crop covered a total of about 5 hectares. Fortunately, the harvesting of the SRI rice and the conventionally grown rice in neighbouring fields took place at the same time, so it was clear to all that the SRI rice significantly outperformed the conventional rice. The SRI crop was a more lush shade of green with more numerous and fatter heads of rice.

In the past, growing white hybrid rice by conventional methods has yielded about five bags of threshed rice per are (10 square meters). The average yield from the SRI project’s fields was eight bags per are. Not only was the harvest appreciably larger, but each grain of rice was fatter, giving an extra three to four kg of rice per bag. The professional harvesters commented that they couldn’t believe how full and large the rice grains were, and how easy the rice was to harvest. (Normally, harvesters must strike a bundle of rice six times to loosen all the grains during the threshing process, but due to the heaviness of the SRI grain, only two strikes were sufficient to loosen all the rice.)

The average yield for the white rice in this first harvest cycle was 8.4 tons per hectare – appreciably higher than the usual harvest of 6.5 tons. Payongan, an area that had adopted SRI in the previous year, had the highest yield at 11.8 tons per hectare. Lower yields due to rat attacks, lack of light and root virus brought down the average for the project. (The non-SRI crops in nearby fields also failed.)

A clump of conventional white hybrid rice typically has a maximum of 26 tillers (individual rice-bearing stalks). The SRI white rice averaged 44 tillers. After several harvests when the biomass of the fields has been restored, the number of tillers per plant can increase to over 65. (Mature SRI fields in India report over 100.)

A typical SRI rice plant was dug up after harvest along with a conventional rice plant from a neighboring field. The roots of the SRI plant were about four times larger as a result of having more sunlight, oxygen and nutrients available to the plant.

Neighboring farmers who initially taunted the SRI farmers for following the new system harvested their fields at the same time. They were convinced that SRI is a superior system and asked their neighbors to teach it to them.

No chemical pesticides, herbicides or fungicides were used by any of the farmers. A small amount of chemical urea (fertilizer) was used.  It has since been learned that the natural phosphorus and potassium contained in Bali’s volcanic ash and dissolved in river and spring water is delivered naturally to the rice fields through the irrigation system, and very little extra is required for optimum rice growing. Direct measurements of phosphorus and potassium in irrigation waters indicate that most of the added phosphate flows back out of the paddies and into the river systems, accumulating to very high levels before reaching the coast (www.elsevier.com 2001).  By composting the rice straw remaining from the previous harvest, the fields will therefore receive optimum levels of N and K without additional commercial fertilizer.  The farmers have been instructed in this technique.

Conclusion:  The training of trainers in the System of Rice Intensification has had a strong positive impact in Bali.  Farmers are by nature extremely conservative and reluctant to change their systems and habits, because they live from harvest to harvest and can’t afford to take even a small loss.   By training the subak leaders who expressed interest in enhancing their crops, the project was able to influence whole geographical communities at a time to try the new technique.  Chakra continues to work with the farmers to develop new techniques for weeding and natural fertilizers.

* 279 farmers were trained by Chakra plus 1181 trained by the original 32 farmers, giving 1460 farmers known to have been trained (the true figure is almost certainly many times higher)

* This project has attracted Australian Consulate in Bali funding for three mobile community rice mills for SRI farmers saving them money in transport and fees and allowing them to keep the valuable byproducts (bran and husk) of the rice for their own use or sale.

On behalf of the rice farmers of Bali, the Rotary Club of Bali Ubud Sunset thanks The Funding Network for its generous grant, which has brought a more sustainable and prosperous system of cultivating rice to the island and benefits to thousands of families.