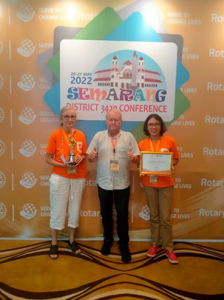 On May 18 of this year, Rotary Club Bali Ubud Sunset [RCBUS] friends President Hans, Secretary Rohani and I left Denpasar and flew to Semarang, West Java, site of the 2022 Semarang Rotary District 3420 Conference. Along with RCBUS, Rotarians from 58 other clubs located in Bali and in Java attended the conference. I’d been to many, many such functions before, but they were all in the United States.  I wasn’t quite certain what to expect at this conference.  I found many similarities to the ones that I had attended in the past and many absolutely delightful differences.

Day 1 – President Hans played golf with many other Rotarians.  He also marketed RCBUS’ annual Bogies for Bali charity gold tournament.  You can read more about that event in the second to last paragraph of this article.  Rohani and I seized to opportunity to explore the hotel, finding rooms where the conference would take place.  We also explored the lovely park across the street (the city was surprisingly immaculate) and met many Rotarians from other clubs from both Bali and Java.  The welcome dinner was held in a breathtakingly beautiful 19th century colonial building, a historical landmark in Semarang’s Old Town District. The building was once a theater and, rumor has that the spy, Mata Hari, used to perform there. Semarang’s Old Town is a UNESCO World Heritage Centre.

Day 2 – The conference was kicked off with pomp, circumstance, and glorious spectacle!  The day began at 9 am when the doors to the Ball Room housing the conference opened and participants were invited in, not by harried staff motioning us in but by a parade of Rotarian dignitaries accompanied by music and members of the military wielding colorful yellow, red, and lime green Chinese dragons which danced, writhing and twisting, to the front of the room, up on the stage, and continued to entertain the audience.  Everyone then joined in singing the national anthems from Indonesia and from Australia, in honor of Rotary International’s President Representative, PDG Graeme Woolacot from Australia. Welcoming speeches were given, including remarks from the Governor of Central Java.  The presentations were upbeat and inspiring, highlighting Rotary District’s successes and growth despite the pandemic surrounding us.  Dinner proved to be interesting. It was scheduled to be lovely outdoor event in the courtyard of another historic colonial building in Semarang’s Old Town – Lawang Sewu, one thousand doors which now functions as a historical museum. It really doesn’t have a thousand doors but the many doors and windows in this gigantic building lead one to believe that it could.  Our bus pulled up to the gate of the building and water just dumped from the skies.  As guests were expected to walk aways to the dining tables, our bus driver decided to give us tour of the city until the rain lessened. When the rain did let up, we trudged over sodden ground to the dining area where chairs had been placed under sheltering roofs of outdoor balconies along with food and drink.  Our elegant outdoor dinner had become a soggy, crowded buffet line and laps became personal tables.  Spirits remined high as apologies for the weather and welcoming speeches were offered.  Musicians moved their instruments under cover, and dancers performed in the rain.  There were Javanese dancers riding ratan horses amongst dancing tigers and dancing monkeys. Other groups performed, including one with flaming torches and hoops of fire, smiling, and not missing a step because of the relentless rain.  It was a wet, but truly magical evening.  Hats off to District Governor Cindy Bachtiar and Conference Chair Sri Ellyani for ensuring that the rain did not dampen our spirits!

Day 3 – At this point, I must confess.  Adhering to the conference theme, “Awakening Fellowship Passion”, Rohani and I spent most of our time on Day 1, Day 2 and Day 3 behind the Sewing for Living merchandise table, interesting other Rotarians in the program in hopes that the program with grow beyond Ubud.  We also spent time interacting with other Rotarians from clubs in Bali and Java.  This was a new experience for the two of us.  Hans proved to be an excellent reporter, bring us a synopsis of each speech or presentation he heard.  Despite the pandemic most reports were positive.  District 3420 is growing and is financially sound. The project of placing toilets in homes and schools was only partially successful. Rotary International’s Global Polio Eradication Initiative has reduced the number of polio cases world-wide by 99.9 percent since it was started in the Philippines in 1979.  At the end of the speeches for the third day, Hans walked over to the merchandise table, placed an award in front of us, and announced, “RCBUS won an award for our Sewing for Living Project. We were third out of 59 clubs in the sustainable community development category.”  He then went on to say that photos of the project were displayed on the conference screen as were photos from RCBUS’ environment program, Long Sam.  The closing dinner included more speeches and presentations, along with more music, including that of the Sasando, an instrument that dates back to the 17th century, and dancing.  The Balinese Kecak Dance was an excellent representation of the kaleidoscopic culture that we enjoy here in Bali. It was a magical and extremely worthwhile conference!

Please mark 10 September 2022 on your calendars.  That’s the date of the 2nd annual RCBUS Bogies for Bali charity golf tournament held at one of the top golf courses in the world, Handara Golf & Resort Bali in Bedugul.  Proceeds from this year’s charity golf tournament will support three RCBUS program: water projects in Bali and Lombok, Sewing for Living, and the Long Sam Environmental Program.  It includes a BBQ, chipping contest, and an awards ceremony. Sponsors and players have already started to sign up.  Don’t wait to reserve your place! Phone +62 361 288 944.

Members of RCBUS are friendly people of action. If you are considering joining RCBUS and would like to attend a meeting to see what we are all about, please contact Marion Hook at marion.hook@gmail.com for more information. IIf you are interested in Rotaract, please include the word Rotaract in your subject line.  We meet every 2nd Monday and every last Monday of the month at Wedja Restaurant in Mas. If you would like to join this dynamic group of people from four different continents who love Bali and work to help the people who live here, information to do so can be found at http://rotarybaliubudsunset.org/how-to-become-an-rcbus-member/