New Members.  Thyr and Karen have now attended three meetings and have filled out an application for membership.  The Board will review their application and then pass it on to the membership for comment.

Retiring Members:  The lovely RTN Patricia Miklautsch is so busy with her wonderful Silent Retreat (http://www.balisilentretreat.com/) she reluctantly decided to leave RCBUS for now.  We wish her the best of luck and will miss her smiling face.

On Friday July 25 the dynamic Hogan Brothers, a popular jazz trio from Oakland California, will perform a benefit concert July 25.  The entrance fee of Rp 100,000 will go towards the medical costs of Ketut Evan Arikrisna, an 8 year old boy from Penestanan who is being treated for kidney cancer.   His surgery was successful and the prognosis is good, but he will require costly chemotherapy which is beyond the means of his family.  This event will take place at Betel Nut in Ubud, doors opening at 7PM and the concert begins at 8PM.  We have posted this on our RCBUS Facebook page http://rotarybaliubudsunset.org/news/12658/   Please post on your Facebook by Sharing the RCBUS announcement.  AND come Friday and bring 10 friends.  Let’s make this the best RCBUS FUNraiser ever! 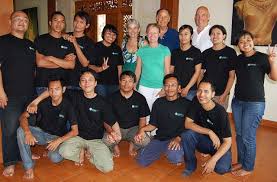 Pres Philip announced that Campuhan College will hold its graduation, Saturday, July 26 at 4.30 at the college, all are welcome to attend.

Our District Governor will visit August 11 to discuss stewardship.  We are working on our stewardship plan and need to establish a good system for our practice.

VP Rucina talked about two unusual ceremonies she’d witnessed in her family to elevate one young bride in caste and demote another. 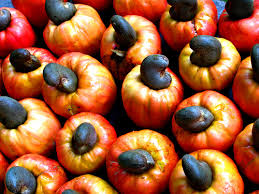 Cashews in the wild

Through Susi Johnston we learned that a German woman was killed in Sanur on Saturday.  We are urged to be careful during the current crime wave which recently had diminished in the Ubud area.

RTN Janet mentioned that many vegan dishes can be made from locally grown cashews, there may be an opportunity to create some cashew products as a sustainable income generating project.  She said she is working on creating several new menu items for Café Havana that will be vegan using cashews. Flags were then exchanged with RCs Stirling and Tailum Bend

VP Rucina introduced  guest speakers The Hogan Brothers, whom she met in the US when they were very small.  Growing up without TV, all three brothers learned to play music from their parents and they now have a popular jazz band.   The family’s long relationship with Bali began in 1976 when their parents travelled around the world in search of world music.  Captivated by the music of Bali, they met like-minded people in SF and founded the first gamelan (Sekar Jaya) outside of Bali as well as a World Music group.  The boys grew up as part of the Balinese gamelan and were deeply influenced by it, visiting Bali first in 1985 and often since then.  Imbued with Balinese music from their earliest years, the brothers made lasting friends with Balinese musicians. Their early years playing gamelan continues to influence their work.  The brothers now play jazz fusion influenced by African music and other world music styles.  Steve and Julian then performed an amazing short vocal percussion set for us which was met with warm applause. They then offered to share information about supporting the fund raising benefit for Ketut in the US, asking their friends to donate to the RCBUS Foundation there.  Join us Friday at Betelnut for the performance.