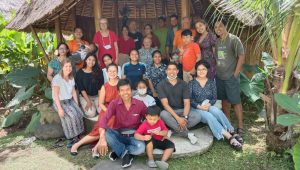 Rotary Club Bali Ubud Sunset [RCBUS] celebrated family, friendships, and the Christmas season on December 19, 2021.  We gathered with our families at Widja Restaurant in Ubud to enjoy the fellowship that membership in Rotary provides, eat delicious Balinese food, and open gifts. Small children and their elders alike enjoyed the festive spirit of the gathering, and we were honored to have Rich Foss, an RCBUS alumni, join in our fun.

On December 11, 2021, two RCBUS members, President Hans Schmid and Marion Hook, traveled from Bali to Burau, Kalimantan, and then on to the Wehea National Forest in East Kalimantan, RCBUS supports the WEHEA Project as part of its effort to grow local economies and protect the environment. The WEHEA Project strives to protect the rainforests of East Kalimantan along with the animals and the Dayak people who live in the shelter of these forests.  The first day in Kalimantan included a 6-hour drive in a 4-wheel drive vehicle over roadways that also accommodated trucks carrying heavy loads of coal, cut timber and palm oil fruit on the way to factories to be processed into oil. As it was rainy season, the roadway to the Wehea forest camp was mostly mud. For two days, Schmid and Hook spoke with Yulie, the area’s Dayak chief; Linus, the WEHEA Project’s manager; forest rangers; and camp staff. New upgrades to the camp buildings were viewed, and the need for an upgraded roadway to the camp was discussed. Schmid and Hook were fortunate to be able to view an orangutan, black tailed monkeys, and a hornbill, all uncaged, in this wilderness sanctuary.

Next, Schmid and Hook traveled to Merasa Village which is nestled deep within the rainforest of East Kalimantan. There, they viewed reforestation projects that not only strengthen the renewal of the rainforest but add to the economic development of the area. Thanks to careful planting of fast-growing cacao trees, microbusinesses are emerging in this tiny village. Schmid and Hook visited a chocolate production business and a honey processing business, both housed in individuals’ homes. The local producers market the chocolate products all over the world and sold them as far away as Germany.

While in Merasa Village, Schmid and Hook attended the blessing of a new WEHEA Project office building which will also serve as a place for community members to gather to strategize about new ideas to preserve the forest and implement economic growth. Village elders also attended the ceremony. Dayak women attired in traditional hand beaded (and very heavy) dress and head gear, performed an intricate and beautiful dance while holding bouquets of Kalimantan peacock tail feathers. After the ceremony, Schmid and Hook boarded a ketinting, a traditional, hand-hewn wooden boat, and were transported down the Kelai river to the Animal Rescue Center in another portion of the Wehea National Forest. The 45-minute boat trip ended when the pair was deposited at the bottom of 100 wooden steps that led from the river to the Rescue Center.

After donning masks to deter the spread of Covid (primates are susceptible to Covid), Schmid and Hook were taken to view the animals that were being rehabilitated. They met a hornbill and a sea eagle, both recovering from broken wings, a 4-month-old gibbon which, when it was an infant, lost its mother to an accident, and several black monkeys which had been rescued from animal traffickers. Spacious, clean cages protected all of the injured or immature animals. Schmid and Hook also met the veterinarian and other caretakers who nurse the animals back to health. When the time is appropriate, the healthy, mature animals will be released into the rainforest or, if that is not prudent, released into a sanctuary.

The staff held several discussions which unveiled projections of the introduction of an ecotourism center in the future. Ecotourism would not only educate a diverse public to the needs of the forest, the animals and the Dayak people, but it would also further enable community economic development.

Schmid and Hook then returned to Burau in hopes of exploring an island which is the home of the endangered proboscis monkey. Unfortunately, the heavy rains were causing the Kelai river to flood, so the trip was canceled.

RCBUS is gratified that our club is able to support two of Rotary International’s seven major causes, supporting local economies and protecting the environment, by investing in the WEHEA Project.

Members of RCBUS are friendly people of action. If you are considering joining RCBUS and would like to attend a meeting to see what we are all about, please contact Marion Hook at marion.hook@gmail.com for more information. We meet every 2nd Monday at Warong Mina Ubud and every last Monday of the month at Sthala Ubud Bali, a five-star hotel managed by Marriott International. It is located in Lodtunduh Village in Ubud. If you would like to join this dynamic group of people from three different continents who love Bali and work to help the people who live here, information to do so can be found at http://rotarybaliubudsunset.org/how-to-become-an-rcbus-member/

Partnering to Save Sight